I’ve seen a lot of Tik Toks debunking children’s nursery rhymes lately. I have two toddlers, so now whenever I hear one of those rhymes, I think about their unsavory origins. But my son loves, loves Five Little Monkeys. He’s just learning to talk, and can almost say it by himself. I’ve thought about telling him to stop singing it since I learned in the original lyrics it’s not monkeys jumping on the bed, but he just gets so much joy from singing it as he jumps up and falls down, I thought... no harm, no foul, right? As long as he thinks the song is about monkeys, it’s ok. 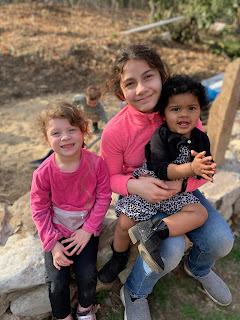 Until my niece came over one day, and the three toddlers were playing on an old mattress we have on the living room floor for them to jump around on. My son asked me to sing 5 Little Monkeys. At first it was cute, because they literally were jumping on the bed, but then I took a good look at the three of them.

My kids are half-Guatemalan but very fair, like I am. Whereas my niece is half-black, and her skin happens to be very dark. As I sang and counted down from five little monkeys, I started to feel uncomfortable. Since the lyrics were originally written to defame people of color, I wondered... now is it racist? When my son sang it as he knocked toys off his own bed, it felt innocent enough. But singing it directly to my niece felt... wrong.

Should I really be singing this nursery rhyme to three kids jumping on the bed, especially when one of them is a little black girl?

I don't actually think I should. I want to raise my children to be anti-racist, and since singing a historically racist nursery rhyme didn't feel right, then it must be wrong.

I'm not going to prohibit Mateo from singing it, because his favorite part is "fell down," anyway, and he often interchanges the monkey character for whatever toy he happens to have in his hand. Thankfully, he'll soon outgrow it. But I won't be singing it to him anymore... or to anyone else for that matter. And when he's older I'll tell him why.