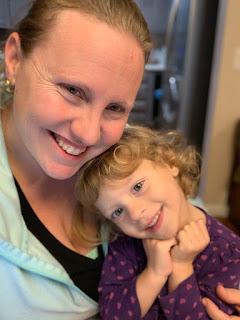 When Maya, Mateo, and I were out running errands today I heard a little boy say as we walked by, "They're speaking Spanish!" Two thoughts struck me as we rushed across Target, looking for the bathroom. First, I was impressed that the boy identified what language we were speaking. Then, it made me wonder what people think when they see an undeniably white mama speaking Spanish with her mini-me: a blond, blue-eyed little girl.
For all of Maya's life, we've spoken both English and Spanish at home, as my husband and I made the decision before I even got pregnant to raise our children bilingually. Even when choosing baby names, we thought about this, because we wanted something that was pronounced the same way in English and Spanish, so our children could easily transition from one cultural circle to the other.
Because she has learned both languages since birth, Maya is considered a simultaneous bilingual child. But at this point in time, I would say Spanish is her dominant language. When I was working, Francisco's cousins were her caregivers and they spoke to her only in Spanish, and during the six months that Tia Mari stayed with us, Spanish became the primary language in our home. These were Maya's most linguistic-formative months (18 months to 30 months), and she heard Spanish the most. So it was no surprised when she started speaking more Spanish than English.
For these reasons, I grew accustomed to speaking to Maya in Spanish. Now that I'm home with the kids by myself, I thought a lot about how I wanted to communicate with her. Maya understands almost everything she is told in English (and has a significant English vocabulary, which I refer to as "friends words:" ball, bubbles, candy, cookies.) And she has English vocabulary she has learned from the books we read in English together, like her colors. But the majority of her productive language is Spanish, even when I speak to her in English. If we are out, I'll tell her to say "Thank you," and she'll respond with "Gracias!"
Since my first language is English and we are raising her here in America, it would be very easy to transition to speaking to her primarily in English. But since she spends almost all of her waking hours interacting with me, I want to make sure she doesn't lose the Spanish foundation she has built with her Guatemalan relatives. Therefore I decided to continue to speak to Maya in Spanish, because it feels weird to speak to her in English after we have mainly spoken Spanish for the past eight months of her life. But when we are out in public, I can't help but also feel weird to be speaking a language other than English. When we went out with Tia Mari, it was evident we were speaking in Spanish because were were in the company of a native speaker, but when I'm out with Maya and Mateo by myself, I can't help but notice strangers' quizzical looks. And then I feel like I have to explain. "My husband is from Guatemala," I say. Or, "We are a bilingual household," or "My husband's first language is Spanish." Sometimes I feel like an imposter. But in almost every situation, people are surprised and impressed to see the mother and daughter gringas speaking Spanish, and that encourages me.
When we first moved to Holliston, I was worried to leave the very diverse setting of Framingham for a much more homogenized town. But I've been pleasantly surprised by how many bicultural and bilingual or multi-lingual families we have met through the library programs we frequent. Maya has befriended little ones who speak German, Russian, Portuguese, and Hindi. And those friendships we make help build her community and my resolve in raising emerging bilinguals.
As difficult it is to raise my daughter in my second language, I believe the challenge is worth it. So we will continue to brave the stares and field the questions, because we are proof that bilingual and multicultural comes in all shapes and colors, and that even gringas can speak Spanish!