Why We Don't Celebrate Halloween

Leaves are changing, there's a chill in the air, and it's getting darker and darker every night and every morning. And on October 31st, All Hallow's Eve, families will be getting their little ones dressed up as princesses and superheroes and ghosts and goblins to get ready to take to the streets to trick-or-treat. But not in our house.

Halloween was originally called Samhain and marked the end of the harvest season for Celtic farmers, and they believed on this one day of the year, the curtain between the living and the dead was the thinnest, and common people would light huge bonfires and disguise themselves to protect themselves from malevolent spirits.

In the 8th century in an attempt to convert the Celts from their pagan ways, Pope Gregory III established November 1st as All Hallows Day, a day honoring all saints, known and unknown. Those early Europeans accepted both, and began to celebrate Samhain as All Hallow's Eve, which has morphed into what we call Halloween today.

When Puritans set up the American colonies, they left all pagan rituals behind,  so Halloween wasn't actually celebrated in the US until Irish immigrants brought their folklore with them when immigrated here in droves, seeking refuge from their potato famine in the 19th century. But Irish-American Halloween was a bit different, with carved jack-o-lanterns instead of bonfires and the demonic disguises became Halloween costumes. Trick-or-treating comes from the custom of "souling" in which the poor would go from home to home, praying for the souls of each family's dead relatives, in exchange for small cakes to eat.

By the early part of the 20th century, Halloween was celebrated widespread through the US and now it's one of America's most profitable holidays and earns retailers billions of dollars each year.

Although Halloween now has connotations of childish merrymaking, October 31st still has quite a sinister reputation in many parts of the world. Many Guatemalans, including my family members, believe Halloween is a day of worshipping the devil, and many churches have voiced their disapproval of the holiday.

I spent many years early on in my marriage trying to convince my husband that Halloween in the US is harmless, but to no avail. When we had kids and starting talking about how we would blend our traditions to create our bilingual and bicultural family, Halloween wasn't something I fought for. In all marriages and families there's compromise and this was something I was happy to compromise on. I have fond memories of Halloween and trick-or-treating from when I was a kid, but now as a parent, I don't see any reason to take my little ones out after dark, walk the streets in the cold, and bring bags of candy into my house. (Now maybe if houses handed out fruit or healthy snacks, that would change my mind!)

Just because we choose not to partake in Halloween, my family still enjoys all sorts of fall activities, like pumpkin patches, apple picking, fall festivals, costume parties, cooking spooky snacks, making crafts, and even admiring the decorations in our neighborhood. 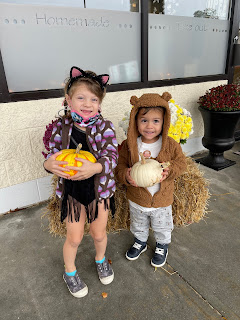