November 01, 2021
El Dia de los Muertos, (The Day of the Dead) is often considered the Latin-American equivalent to Halloween, as it is a celebration that takes place every year on November 1st and 2nd throughout Latin America. But it actually has nothing to do with Halloween, and even pre-dates the Celtic Samhain, which is where our modern-day Halloween traditions come from. 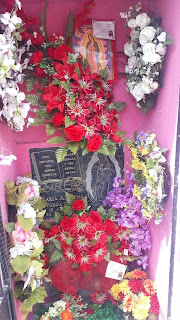 The ancient indigenous Aztec people of Mexico celebrated the lives of past ancestors 3,000 years ago, and that month-long ritual was condensed into just a few days around the 20th century and is now known as the Day of the Dead. Today, El Dia doe los Muertos is a time for Latinos to remember their dead loved ones and celebrate them, for it is believed that the souls of all people that have passed away return to Earth to check up on their families during this day.

Last night as I was writing about the history of Halloween and I saw online that El Dia de los Muertos is celebrated throughout Latin America, I was confused. So I asked my husband to clarify.

"Francisco, do you celebrate El Dia de los Muertos in Guatemala?" I asked him.

"Absolutely, it's a huge celebration," he told me.

"Really?" I responded, incredulous. "What do you do?"

"We visit the cemetery and it's a big party, eat fiambre, fly kites, and make ofrendas," he explained.

I was completely surprised, because although I had eaten fiambre before (it's a cold salad of picked vegetables, cold cuts, and sausages) I had no idea it was a traditional food of El Dia de los Muertos and I couldn't believe this was the first I'd heard of any of this.

"Here the dead are just dead," he said.

And my heart dropped.

That was as far as our conversation went, but his words resounded within me. How could it be that they would leave such a huge piece of their culture behind? Especially since we try so hard in our family to embrace both of our cultures and educate our children about what it's like to be Guatemalan-American.

But I think his comment says so much about the immigrant experience here in the US. No matter how hard you try to keep culture alive, how can traditions like El Dia de los Muertos survive, when the point of the celebration is to visit your dead loved ones in cemeteries where they are interned? It's not like most immigrants can hop on planes every October 31st and go home for a quick visit. Francisco wasn't even able to return to Guatemala when his mother was ill in 2013 and he wasn't there when she died shortly after. He didn't get to visit her grave until we went to Guatemala together in 2015.

So although I want our kids to know about both of our cultural backgrounds, I'm not going to fight for El Dia de los Muertos, either. I imagine days like today might just be a little too painful for most, and so that's why traditions like these are left behind. 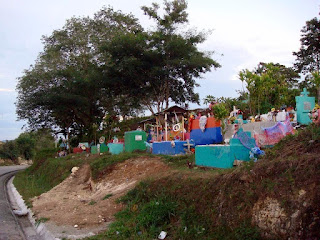