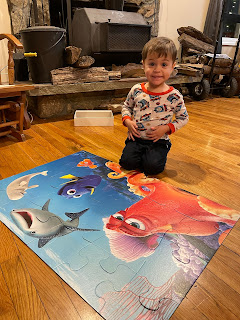 When Maya was two, she was still in the single-word and simple phrases stage. I worried about her language development, because I saw her monolingual peers conversing. We didn't spend much time with other bilinguals then, so I didn't have anyone else to compare her too.

Maya and Mateo are classified as simultaneous bilinguals, which means they have been exposed to two or more languages since birth. These children incorporate all the languages they are exposed to into their oral language, and they go through the same stages of development as monolinguals. But the difference is that from their earliest development, simultaneous bilinguals share their vocabulary knowledge between their two languages. It might feel like they have a more limited vocabulary than their monolingual pairs, but when you look at their vocabulary across the two languages--they will know at least as many words (or more!) than monolinguals.

That gave me hope and some reassurance, and by three-years-old, Maya had caught up conversationally to all of her friends. So when Mateo started speaking in complete sentences at two-years-old, I was dumbfounded!

I was under the impression that second-born children speak less, because they have more people within the house to speak for them.

But I was wrong! Mateo absolutely refuses to be left out of any conversation, and sometimes he can even out-talk his older sister.

No matter when our kids say their first words, or phrases, or sentences, the most important thing is to create the most language-rich environments as possible, so they continue to development at their own pace. But I must add, listening to my 2.5-year-old speak fluent Spanish (and switch to English with his English-only friends and family) makes this Mama so proud!