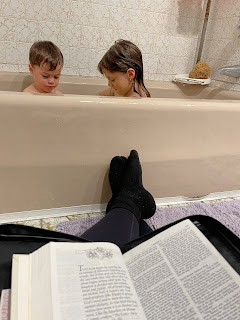 Since it is my New Years resolution to read the Bible cover to cover in 2022, I try and read some every night, even just a few chapters if that’s all I had time for. My coronacation helped me get a head start, and I’m making good progress toward my goal, as I began 1 Kings tonight.
After missing a few nights in a row, I didn’t want to miss tonight, so I decided to read my Bible as my children bathed. I’be thought about it but never done that before, because I’ve always been to worried that their splashing might damage my grandmother’s Bible.
But tonight I took a chance and I read it aloud to them, and it was the most tranquil bath time we’ve ever had. I knew they were listening, but I wasn’t sure if they were into it or not. After a chapter, I asked if they wanted me to keep reading aloud and Maya said, “Yes, Mami, I like it.”
So I sat there and read to them 1 Kings 1-5. If you know your Bible stories, you’ll know that includes the record of the fist wise judgement of King Solomon. After receiving the Lord’s blessing to be the wisest king in history, King Solomon has a chance to make such a decree. Two mothers come before him, asking his decision over their situation. Both mothers were living together with infants, but one dies. Both mothers claim the remains son as their own. Solomon says to cut the remaining baby in two with a sword, and each woman would receive half. Immediately the true mother is revealed because she says, No! Let the other woman have her so that the boy can live.
I’ve read this story before of course, but tonight as I reread it I got choked up. I couldn’t help but feel that reading this story in the presence of my own precious babies made it even more poignant.
Since we started to attend church in person again back in November, I’ve been surprised by all the tiny moments in which God interjects his wonders into my life like this. Out of all the Bible stories I could have read tonight in the bathroom with my kids, what better story to come across than one of a mother’s undying love for her child?