Halloween is Maya's favorite holiday, which is ironic because we don't even celebrate Halloween. My Guatemalan family, husband included, believe Halloween is a debaucherous holiday for worshipping the devil. After many attempts to explain to my husband that Halloween's origins date back to the ancient Celtic new year festival of Samhain, and in the United States it is all harmless fun, my husband remains unconvinced, so since having children my husband has be adamant that we not take part in it. In building a marriage that intertwines two different languages, cultural backgrounds, and traditions, one learns there are battles to be fought and battles to let go, and so I decided Halloween was one American tradition that wasn't worth fighting for. Ultimately, families argue with their children over their costume choices, spend money on cheap garments that are only worn once before being discarded, and kids bring home bags of candy that only wires them up and is bad for their teeth. In my mind, we haven't lost much by not celebrating this holiday.

But Maya is absolutely obsessed with Halloween. Since she has never been trick-or-treating, she has no idea that the biggest allure for most kids is the mountain of candy that comes with October 31st. Instead, she adores the decorations. It began last fall, pre-COVID19, when between the three kids, we used to have appointments almost every day after school. In the beautiful fall afternoons, I'd load up the car with Maya, Mateo, and Sofia and we'd drive around the surrounding area admiring the foliage and the houses decked for Halloween. At two, Maya was big enough to look out the window and see the ornately decorated houses, and that became her favorite part of our afternoon adventures. "Ha-wa-ween!" she would yell every time she saw a pumpkin on a porch, inflated monster on a front lawn, or a ghost hanging from a tree. And as soon as October 31st came and went, she began asking when Ha-wa-ween would happen again.

This fall looks quite different than last year and we barely go out in the afternoons anymore. But that didn't stop Maya's enthusiasm. So whenever we did get out, we marveled at the impressive display our neighbors put up for everyone's enjoyment this year. And they definitely didn't disappoint!

With Halloween Eve looking like Christmas Eve with five inches of snow, we wouldn't have gone out trick-or-treating, anyhow. Instead, we stayed home, read some Halloween books my dear friend gave us, and did some holiday crafts that our neighbor gave us. So even without explicitly celebrating Halloween, Maya, Mateo, and Sofia couldn't help but have some fun. 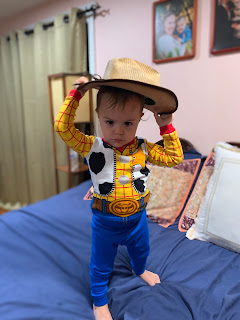 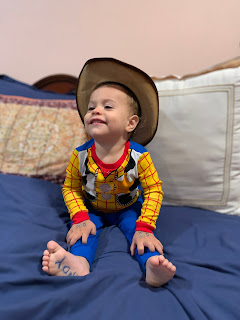 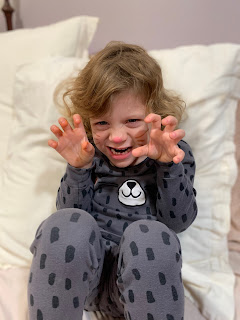 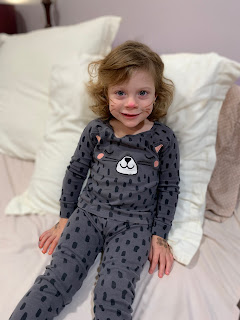 I wouldn't be an American if I didn't at least dress my kiddos in character pajamas for bedtime.
So here's Mateo as Woody from Toy Story and Maya as a kitty cat.