Learning ABC's in English and Spanish

Maya has shown a lot of interest in the alphabet recently, so I figured it's time to start learning some letters. As a bilingual family and now that I'm doing homeschool preschool with the kids, I gave some thought as to whether I should teach the alphabet in English or Spanish first.

Since quarantine, Maya's English vocabulary has exploded. I think back to when my mom was worried that she wouldn't learn any English at all, and now Maya is nearly fluent without me having to explicitly teach her a word. Since she has been spending so much time with her English-speaking grandparents and watching children's programming in English, her vocabulary and fluency really bloomed. As soon as she figured out that English is the language of the community, she now demonstrates a preference for English.

I continuously find myself having to remind her to speak in Spanish with my husband and me, so I decided it made most sense to focus on teaching her Spanish phonics. That way we would have specific instruction in Spanish each day, and since the Spanish alphabet and the English alphabet share the majority of their letters, there will be a lot of skill transference from one language to the other when she is ready to start learning to read and write in English.

But then my second conundrum arose. Which Spanish alphabet should I teach her? And did you even know there are variations of the Spanish alphabet? First, there are two different words in Spanish for alphabet: alfabeto and abecedario. Then, there's the single-letter version, which includes the same 26 letters as the English alphabet and also ñ. There's also another version that includes language-specific consonant blends as letters, such as the double l (ll) which makes a sound like the English (y), the "ch" sound, and "rr."

To start, I chose the 27-letter version, because in my opinion ll, ch, and rr are not letters specifically, but consonant blends, and when we begin phonics instruction, I'll be sure to teach Maya and Mateo about them. We found an old finger pointer Sofia had purchased at a school book fair a few years ago, and I scribbled a hasty abecedario on some butcher paper and our one-room school house was open!

But when I told my friend Ashley, an elementary Spanish teacher, was vehemently against this idea and said she intentionally teaches all 30 letters to her students. She felt in order to give my emerging bilinguals a well-rounded education, it was imperative that I teach them all 30 letters. And a few days after, this beautiful poster arrived in the mail!

Now Maya and Mateo love practicing their abcs, identifying the corresponding images that start with each letter, and even practicing the colors of each row. And it's no surprise their favorite letter is .... M. 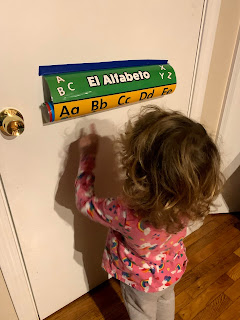 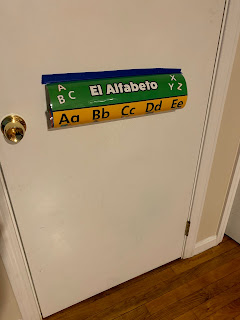 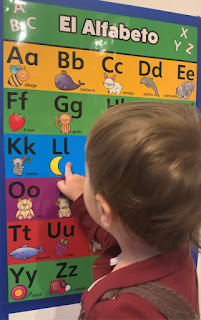 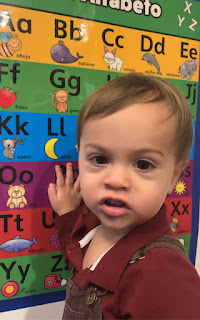