Should illegal aliens be able to get driver's licenses? 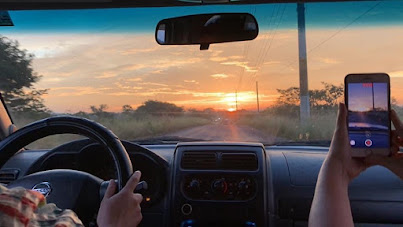 Ah, Massachusetts, you had a chance to prove that civil rights are human rights… and you did it! Yesterday, Massachusetts voters chose to uphold a new law that would allow driver's licenses for those not living legally in the US. I want to share why this is so important not only at a systematic level, but at a personal level.

This bill eliminates the restriction that says a driver’s license cannot be issued unless a person has lawful presence in the United States. Proponents have been trying to make this bill a law for 20 years, and now it's set to take effect July 2023.

But why is this such an important issue? Allowing undocumented immigrants to apply for driver's licenses puts more licensed and insured drivers on our roads. It does not mean more undocumented people will be flooding our state. It means vehicular safety for those of us who are already here. Would you rather be involved in a car accident with a driver who has a driver's license and car insurance, or one who does not? The answer to that questions seems like common sense. The past 20 years have shown us that immigrants will drive whether they are licensed or not, and I would much rather be sharing the road with legal drivers.

Massachusetts is not on the forefront of this issue. Seventeen other states, along with the District of Columbia, have passed similar legislation and as a result, have seen a decrease in hit-and-run accidents and a decline in arresting unlicensed drivers.

Drivers license applications will still need to show proof of identity and birth date, and pass the driver's test. This just gives people a chance.

Currently, in order to apply for a standard driver’s license or ID card, applicants need to provide valid, verifiable immigration documents as well as proof that they have been granted a legal stay in the United States for at least 12 months. That 12 months caveat was added in 2016, much to the consternation of my immediate family. And that is why this issue is so important to me, personally.

We adopted my husband's youngest brother and sister, Audelina and Justo, from Guatemala in 2015. Along with obtaining legal guardianship of them, we were able to petition for their green cards. But the process is long and arduous, and both of them received their work authorization permits before their green cards. At that time Justo was over 16, so as soon as he received his social security number and work authorization in 2017, he took drivers education classes, got his driver's permit and then his driver's license. At that time, any immigrant with legal status here in the US could obtain a driver's license in Massachusetts.

Audelina turned 16 in 2016, and it took her about a year to take driver's ed and pass her permit test. By the time she was ready to pass her permit test, the licensing qualifications had changed. In July 2017, Massachusetts changed the licensing protocol from any immigrant with legal status, to only immigrants with documentation of legal status for more than 12 months.

We didn't realize this when we showed up at the RMV, Audelina ready to take her driver's permit test and baby Maya crying in the papoose. Everyone left the RMV crying that day, when we were informed that although Audelina was a legal resident of the US with her work authorization card, that card was only good for 12 months. In order to get her driver's permit that day, she needed to have a documentation that was valid for more than 12 months, and the only documentation with that time span is a green card. So the July 2023 revisions made the statement "only documented immigrants can get licenses" a fallacy. There are plenty of document immigrants who cannot get licenses, because their documentation only grants them residential status for 12 months (like our immigrants with work visas.)

So how are documented immigrants with work visas expected to get to work??? I demanded of the RMV official who callously clarified that particular wording.

He told me that Massachusetts allows documented immigrants with licenses from other countries to drive with their foreign license for up to one year.

But what about young people like Audelina who left their home country before they were old enough to apply for a driver's license there??? And who are deemed "legal residents" in this country under the eyes of the law because of her work permit?

Unfortunately, people like Audelina were completely out of luck. The injustice of it all infuriated me. My husband and I had worked so hard and spent so much money to make sure Audelina and Justo were legal residents of this country, and she still was denied the civil and human right of being able to apply for a driver's license.

The ending of this anecdote was that her green card actually arrived the next month, she passed her permit test, and did eventually become a licensed driver. But that does not negate the discrimination she experienced as a result of the current licensing laws in our state.

I could do nothing about that injustice on that day, but I voted Yes on Question 4 yesterday. And I am overjoyed that 1,091,354 others stood in solidarity with me.

I have seven brothers-and sisters-in-law‘s (including Audelina and Justo) who live in, work in, and pay taxes to Massachusetts. Not to mention the innumerable amount of cousins and other relatives from Guatemala in this area who do the same. They could not vote yesterday, but I could. So my vote counted for all of them.

This is why I vote… for those who don’t yet have a voice. 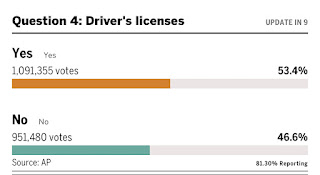