December 24, 2019
Tonight all across the world, children are waiting for Santa with bated breath. They've made lists of wants and perhaps written letters addressed to the North Pole, baked cookies, set out milk, and dream of sugar plums dancing in their heads. But not my children. Well, maybe the dreaming of sugar plums part, but definitely not the white beard, chubby and plump right jolly old elf part. Even before my two biological children were born, my husband and I made the decision to not deceive them with the narrative of Santa, and in fact, not give them any gifts at all on Christmas. Intrigued? Infuriated? Here's why... 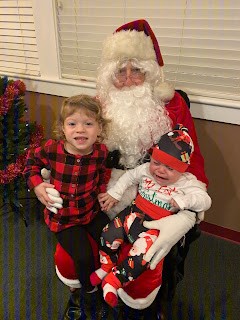 My husband is from Guatemala and was raised Jehovah Witness, and one of the tenants of that faith is a strict adherence to not celebrating anything here on earth. This includes not celebrating Christmas or birthdays, and not giving gifts to commemorate these days. While he isn't a practicing Witness right now (instead we attend Celebration International Church), their doctrine and practices were ingrained in him since childhood, and he still holds dear many of their beliefs and the reasoning behind it. When he and I married and we began to blend our background and cultures and traditions, we talked a lot about what we would continue to believe and which traditions we would continue to follow as we began our own family. After adopting his youngest brother and sister from Guatemala in 2015, we decided we would not celebrate Christmas by giving gifts, but instead by spending time with family and appreciating the real reason behind the holiday--the birth of Jesus.

At that time, our two kids were 14 and 17 years old, so they were past the age for believing in Santa, anyway. But now that we have three Emerging Bilinguals ages nine, two, and six-months, the onslaught of advertising for Santa is overwhelming. We have chosen to not teach our kids to believe in Santa not because we are Scrooges, but because we think it ingrains the mentality of consumerism from far too young of an age, it detracts from the true meaning of Christmas, and it polarizes children between the "haves" and the "have nots."

We want to teach our children that happiness on Christmas morning has nothing to do with having presents under the tree, but instead has to do with the friends and family with whom we spend time on that day. Unfortunately, the question for which Santa is famous is "What do you want for Christmas?" We want to make Christmas less about "wants" for shiny toys that will fizzle and break within a few weeks, and more about what the Christmas seasons should be--spreading hope, joy, peace and love.

And just to be clear, our children want for nothing. They have all the clothes, toys, books, and games that they need, and we do not hesitate to give these items to them when necessary. We just don't want them to become hyper-focused on gift receiving. Social media has been abuzz recently with a campaign for parents to stop saying expensive gifts are from Santa, and I completely agree. For the families whose children do believe in Santa but don't have the budget for extravagant gifts, it can be debilitating for those kids to see their peers getting expensive items from Santa, when they themselves did not. For those children, Christmas can be just another reminder that the world is not a fair or equal place, and isn't that the opposite message we are trying to promote this season?

As you can see in the photo, we still took a quintessential photo with Santa (and Mateo was not enthused!) But for us, taking a photo with Santa during Christmas time is like taking a photo with Mickey Mouse at Disney Land. He's a character from a lyrical story, and he isn't coming down our chimney tonight. Instead, we tell our kids that the story of Santa was based on a real person who lived hundreds of years ago, a monk named St. Nicolas, who helped the poor and sick and gave to those in need.

Yes, it is the season of giving, but why not give a hug, or a listening ear, or a home-cooked meal instead of a present this year? It is often the gifts that cannot be wrapped that have the most meaning. 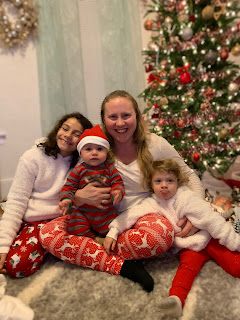 I would be remiss if I didn't add, when we eliminated giving gifts at Christmas five years ago, it unsuspectedly became a gift to me, because it gave me my Christmas spirit back. Instead of spending the days between Thanksgiving and December 25 overcome by the hustle and bustle and fighting crowds shopping for a materialistic gift to give everyone I know, I've had the most relaxing and meaningful Christmas seasons of my adult life. Instead of shopping without them and spending time wrapping and hiding gifts from them, I have the time back to invest in the relationships with my loved ones, and that has been the best present of all.

Merry Christmas to all, and to all a good night!