Spanish are from Spain, Hispanic are from.... everywhere

January 22, 2020
My friend Ashley, the kids, and I went out to my favorite lunch spot last week. As we were greeted by our server, she asked us what we wanted to drink. I turned to Maya and asked, "Quieres jugo o lechita?" Maya responded, "Lechita." The server, a friendly young white female, seemed impressed. She fumbled over her words a bit, clearly trying to articulate how to ask us how a blonde, blue-eyed mama and daughter duo can speak Spanish to one another. I sat there with a smile on my face, but let her stumble. I cannot say that this scenario is uncommon when I go out with my daughter and people see us speaking Spanish in public, and I choose not to rescue people when they inevitably put their foot in their mouth. Eventually the painfully awkward exchange ends with the server asking us, "So, is her dad Spanish?"

"My husband speaks Spanish," I nodded, gently correcting her with a smile, and she left to retrieve our glass of water with lemon, Coca Cola with no ice, and kid's milk.

But her question makes me cringe for multiple reasons. First, a dear Puerto Rican friend of mine taught me long ago that just because someone speaks Spanish, doesn't mean that person is Spanish. Spanish is a language, and the ethnicity of people from Spain. People who speak Spanish are referred to as Hispanic, and Latino is the term to refer to people who are from or are descendants of Latin America. It's become quite the slang as of recently to refer to Spanish-speaking people as "Spanish," a term is used by Hispanics and Americans alike. But the correct way to refer to a Spanish-speaker when their heritage is unknown is to call him or her Hispanic.

Additionally, the preconceived notion that one must be of Hispanic-speaking descent in order to speak Spanish fluently is debilitating. With over 50 percent of the total number of US students enrolled in a foreign-language course taking Spanish, only 13 percent of US residents are fluent in Spanish. As a language teacher and a math teacher, it's disappointing how those numbers don't compute. With so many students learning Spanish as a second language, why can't anyone actually speak it?? Ironically, our lunch companion was also a fluent Spanish second-language learner, who now teaches middle school Spanish. With her skin tone and features, she often is mistaken for a native Spanish speaker. With my daughter and my features, we are not.

I'd love to see a mind-shift change in this country, which is in essence a melting pot, but has prided itself in its ethnocentricity and monolingualism for far too long. It is my hope that people like my friend, myself, and my three emerging bilinguals can help lead awareness to the benefits of bilingualism and show that it's possible to be bilingual, no matter what your age or race.

And I hope that one day my daughter can proudly identify herself as a Hispanic Latina who speaks Spanish (and English!) fluently. 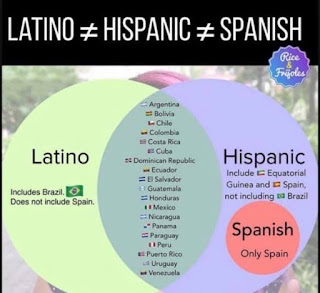