We may not share the same name, but we are family just the same

January 24, 2020
On Thursday I took everyone to the doctor's office. We are patients at a large medical group in Framingham, and I like it because all of our doctors--pediatrician, adult medicine, OBGYN, phlebotomy, and even radiology, are all in one building. Even though we have moved out of Framingham and now it's a bit of a trek to attend an appointment there, I absolutely love our doctors, so I made the decision for us to remain patients there. But, I am always cognizant of the 25-minute travel time to and from the office, so I try and double-up appointments whenever I can. Back in July, I actually scheduled my 6-week post-opp, Maya's 2-year, and Mateo's 6-month appointment all on the same day, and in December, I scheduled Maya and Sofia's flu shots on the same day as Mateo's 6-month check-up. It makes for quite a long morning to have three abutting appointments in one day, but it beats having to travel back and forth on three separate days. 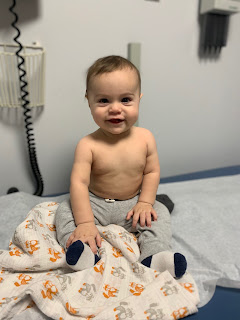 Although I lugged everyone along yesterday, we only had two appointments, one at 3:30pm for Sofia to get her ears checked, and one at 4:00pm for Mateo to receive his booster flu shot. Thankfully, Sofia demonstrated perfect hearing and Mateo didn't even cry over his shot.

I take the time to share this anecdote with you today not to boast about the children's health, but to reflect upon something the nurse said to us at the beginning of the appointment. She called Mateo and Sofia's name from the waiting room, and we dutifully followed her into the exam room. She was pleasant and asked us how our day had been. As we got settled in the exam room (which is actually quite a feat, what with three kids and three coats and the doona car seat taking up most of the floor space) she asked us to verify the date of birth of both of the patients. At nine years old, Sofia could easily state her complete date of birth, and I recited Mateo's. The nurse then turned to me and said, “I didn’t realize they were siblings because they had different last names.”

And therein lies our microaggression of the day. What is a microagression? According to Merriam Webster, a microagression is a a comment or action that subtly and often unconsciously or unintentionally expresses a prejudiced attitude toward a member of a marginalized group (such as a racial minority).

It pains me to say this is not the first time we have encountered a situation where the relationship between my three children and me has been questioned by a complete stranger. Everyone usually assumes Sofia is Maya's and Mateo's big sister, and since she is technically their foster big sister, we don't trouble ourselves to correct them. So in this moment, neither Sofia nor I correct the nurse. I just say, "Uh huh." And then she begins to take the kids' vitals.

But I'm struck with the ignorance and hurtfulness of her words. In this case, her assumption was true--Sofia and Mateo do not have the same last name because they are not biological siblings. But I know plenty of biological siblings and half-siblings who don't have the same last name, and they are still siblings just the same. Her words insulted me as a mother, because what if I did have children with two different fathers? Would that make them any less siblings? It's 2020 for goodness sake! Families come in all shapes and sizes nowadays.

The ironic part is that my two biological children both have the same father, but actually have different last names. We messed up when we filled out Maya's birth certificate, and put my last name first and my husband's last name last, because we live in the United States, which recognizes the ending name to be the family name. However, the Guatemalan law is for the father's last name to come before the mother's last name, so when Mateo was born two years later, we put his in the correct order. We will probably file an official name change with the court for Maya one day, but for now, my children actually have two different last names.

I share this instance today, not with the purpose of admonishing the nurse, but instead to remind everyone to think about how their words might be heard or interpreted before they speak them, especially around children. Maya and Mateo had no idea what was going on, but as I said, Sofia has been in situations like this too many times before, and as a foster child who already feels like the "other" sometimes, she doesn't need strangers to point out that fact. I know the nurse wasn't trying to be discriminatory or detrimental, but that is the nuance of microagression. Often times microagressions sound innocent or complimentary on the surface, but the connotations of the words are unintentionally bias.

No, none of my children have the same last name, but they are siblings, all the same.