Hello, Hello, The View from this Side of Quarantine

June 17, 2020
So my kids left the house for the first time in 90 days this week. We got a small above-ground pool to make it through the summer, and so after Francisco installed it on Sunday, we trekked to Ocean State Job Lots on Monday after nap time for some essential pool supplies.
I would have preferred to go shopping alone, but the store was almost closed by the time I could have left the house solo on Sunday, and since now we are at the height of landscaping season, Francisco leaves at dawn and doesn’t return each day until dusk, which made it just about impossible to go out on my own when he comes home from work.
I weighed the risks of going shopping with all three kids, and thought about all the precautions I would take to keep them as safe as possible. I decided to bring the double stroller, so I could contain both Maya and Mateo and keep them out of the possibly contaminated shopping carts and aisles. Sofia would be in charge of pushing the stroller, so her hands would be occupied, too, and everyone was given the strict rule to not touch ANYTHING (and constantly reminded as we circulated the store.) Sofía and I dutifully wore our face masks, and I tried to get Maya to wear hers, but she hated having it snug behind her ears and covering her nose. I decided I wouldn’t fight her on it, since she is only a few weeks into age three and the regulations are that kids three and older wear masks. But it also made me wonder how she is going to survive attending preschool under the new COVID-19 guidelines and possibly expected to wear a mask all day, since she is slated to start school in the fall. (I’ll share more thoughts on that in another post!) 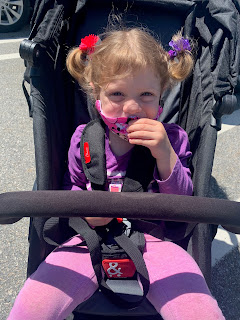 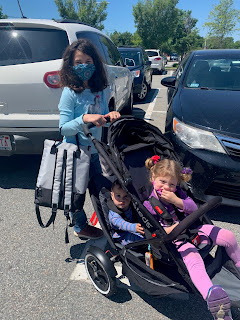 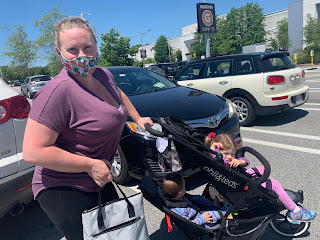 The purpose of my sharing this narrative here today was not to confess that I endangered everyone’s lives in order to obtain some cheap pool toys, as Sofia so impertinently pointed out to me multiple times during our outing. Instead, I share this experience because I was so struck by Maya’s behavior while we were out. She literally said “Hello!” to everyone we encountered!
At first as we were wheeling around the store, I thought it was cute and precocious how she said “Hello, hello,” to everyone. She said it in a funny voice, like the voiceover for the #howareyoutoday videos on Tik Tok, so in the moment, it felt like she was just messing around. But when I was reflecting on it later, I realized this was the first time she had seen anyone outside of her immediate family for a total of 90 days. My little toddler who was accustomed to having an adventure everyday, has just spent 1/4 of the year 2020 not even leaving our own property (except for the occasional drive-thru at Dunkin’.) This quarantine of 90+ days feels long to us, imagine how long it must feel for her... it’s been almost 10% of her life! So her greeting everyone we passed was her way of re-emerging into society once again, and perhaps claiming just a small piece of normalcy.
I know this mandatory social distance quarantine has been tough on all of us, but it has also forced us to stretch and grow in ways that weren’t even on our radar. We’ve a established new home routines and a new normal, where we are surrounded by each other constantly, and while that has caused a bit more tension that normal, it has also allowed us to make memories that we would never have had the chance to make. It also has made us far more appreciative of the little things that we once took for granted. I hope as the quarantine begins to lift, we can all remember these lessons we’ve learned, and greet the new normal with the exuberance of little Maya. “Hello, hello!”