June 03, 2020
Two years ago we moved to the 11th safest town in Massachusetts. I felt so safe and confident in that choice, and now I can say we are lucky to be far away from the looting, the riots, the mobs, and the police brutality that has surged in the aftermath of George Floyd's death. But just because we out of harm's way, does not mean we are safe from discrimination. 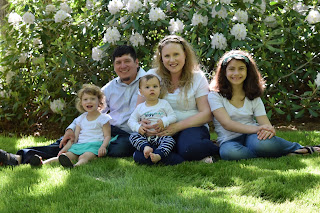 While I have always left the house safely insulated by my white privilege, every other one of my family members with the last name Barrios has been racially profiled or discriminated against, in big ways or small ways, due to their diversity. My husband was even charged with a crime he didn't commit when he first came to this country and spoke very little English, because the arresting police officers told him to just say yes and he would be able to go home. The charges were quickly dropped and his record expunged, but just remembering him telling me about the event makes my heart pound and my blood boil.

I will be the first to admit I lived the first 18 years of my life as a naive young white woman, growing up in a small town 80 miles north of Los Angeles that was 82% white, 12% Hispanic or Latino, and 3% two or more races. There were so few black people in our town that they didn't even represent a full percentage in the demographic profile. Then I moved to Boston, roomed with two black girls from NYC in the Northeastern dorms, began a teacher preparation program that was deeply rooted in multicultural understandings, and my eyes were opened for the first time to the real world around me. It wasn't until then that I became aware of white privilege.

Now, as I raise three bicultural children, who can each be categorically defined as "white," I know it is my job to educate them early about the privileges and responsibilities of those of us with light skin.

By now, most people are familiar with the terms bystander and upstander, coined by anti-bullying education and legislation. I do not think it is a stretch to state that racists and silent racists are the biggest bullies of all. So it is my goal to model for my children how not be a bystanders, and instead be an up stander for those who are oppressed by blatant or systematic racism.

In 1993, Dr. Maria P.P. Root wrote a ground-breaking Bill of Rights for People of Mixed Heritage. 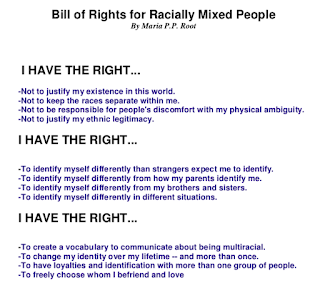 Root's Bill of Rights was the first time thoughts like these had been put on paper, and it helped lead the movement for a multiracial classification on the 2000 census. Now, almost 20 and 30 years later, being born of mixed heritage can still be an identity that children struggle with.

Emi Ito, a social-activist fashion designer, who passionately speaks out against cultural appropriation, was inspired by Root's Bill of Rights to pen a Bill of Responsibilities for Multiracial People of Color with Light Skin & White Passing Privilege. 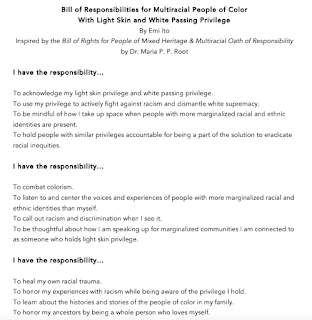 As my children get older and begin to form a deeper understanding of their place in the world beyond our home, I will share both of the creeds with them. Until then, I've been thinking about what are my rights and responsibilities for raising bicultural and bilingual children. So I decided to craft my own creed, inspired by the statements of Root and Ito.

I have the responsibility…
To teach my children about the histories and stories of the people of color in our family.
To teach my children to love, recognize, and embody each and all of their heritages.
To make sure my children know they don’t have to justify their existence in this world.
To reflect upon my experiences (or lack of) with racism and realize my children’s experience might be quite unlike my own.

I have the responsibility…
To let my children identify themselves however they choose.
To teach my children it's okay to identify themselves differently in different situations.
To create a vocabulary to communicate with my children about being multiracial and multicultural.
To expose and surround my children with people from the non-dominant community, so that they grow loyalties and identification with more than one group of people.
To instill within my children that it is their choice whom they befriend and love. 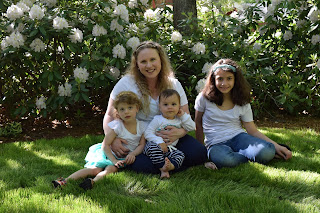 None of the statements above are particularly easy, but they are of upmost importance in order to make our world safer for my children, your children, and all children. I stand with you. We stand with you. And we will stand until the minority is the majority and gets the justice and fair treatment everyone deserves.