In New England, apple picking is the quintessential fall fun activity. I actually didn't know going to an orchard to pick your own apples was a pastime until I moved to Boston, but after I went with my youth group during my freshman year of college I was hooked, and I've been apple picking with friends or family every fall since. I have beautiful memories of walking up and down rows of apple-laden (or sometimes picked bare!) trees, trying to climb to the top and always searching for the shiniest, juiciest apples. Even one of Francisco and my first dates was apple picking.

In my 15 years of residency on the East Coast, I've visited a variety of apple orchards in New England nearly every autumn and a few years ago, I thought I had finally found the perfect place. Tougas Family Farm had everything you wanted for your perfect fall afternoon--apple and pumpkin picking, fresh apple cider and donuts, kettle corn, a petting farm, a hayride, and a playground for the kids. But it also had something I never expected: racial profiling and discrimination.

When Maya was a baby and we had family visiting us from New Jersey and Guatemala, I thought the perfect New England experience would be to take them apple picking, so we loaded up and went to Tougas Family Farm, a place I had visited many times before. We had a pleasant enough time at the beginning, but a hale storm that June had damaged the apples, so we had to search particularly closely to find nice-looking apples without ugly pock marks on them. It was a busy, warm day and after spending so long out in the sun, one of our family members volunteered to sit in the shade by the tractor with our large $40 bag of apples, while the rest of the members in our group perused for a few more apples.

Tia Mari and I set out up a row of blondee apple trees and I picked out six and carried them in my hands as we made our way back down the row and toward the main thoroughfare. Nobody said anything to me, a white woman with her arms filled with apples. But as soon as I passed the apples to my husband's aunt from Guatemala, an employee came up to her and asked her in broken Spanish where was her bag. She tried to explain that it was too heavy to carry around, but the employee proceeded to follow her all the way to the bag and make sure the 6 additional apples fit on top.

I could not believe the racial profiling that went on in that orchard that was overflowing with ugly apples! When I tried to speak with the employee about his actions, he said, "I'm just doing my job."
I was so disappointed in the way that employee behaved, I wrote a bad review on Facebook, which sparked an active debate on the merits and moral character of Tougas Family Farm. A simple Google search for its reviews touts 4.7 stars, but when you read all of the one-star reviews, the majority of the reviewers reference discriminatory behavior on the part of employees. So I know this was not an isolated incident. It is disappointing that is how Tougas has trained their employees to behave and so I was intent to find another farm to give our business.
The good news is we found one! And it's more local, more friendly, and far less commercialized and crowded. This weekend we visited Dowse Orchards in Sherborn and had the best time. This farm was the complete opposite of the over-commericalized and inhospitable atmosphere of Tougas. There was no admissions fee, no hand stamps and no bag checks. At Dowse Orchards, there were no prejudiced employees policing the picking customers, just one lone attendant selling bags from a shed on top of a hill. Because it was just the kids and me picking, we selected the medium-sized bag, which Sofia valiantly carried throughout the whole orchard, even as it got heavier and heavier with our harvest. She also climbed to the top of the trees to select the best apples for us, and Mateo had to taste test every apple he encountered.
We wore our masks when we weren't snacking on apples or taking photos, but I didn't even have to worry about Corona Virus contamination, because we were able to stay far away from all of the other patrons because of the capacious design of the orchard and rows. It was the absolute perfect way to spend a Saturday morning in the fall sunshine.
After we had filled our bag to the brim, we stopped by the Dowse Orchard Farm Store on our way home to select some decorative pumpkins, and on a whim, we also bought a fresh pumpkin pie, which turned out to be the tastiest pumpkin pie I've ever eaten.
I am so glad we found this hidden gem, and we will definitely be returning here year after year!
This incident of discrimination against our family happened three years ago, but now more than ever, I feel it is of upmost importance to shop not only local, but invest our money in businesses with ethical practices, who treat and value all of their customers as human beings.

Here we are enjoying the day at Dowse Orchards, Sherborn. 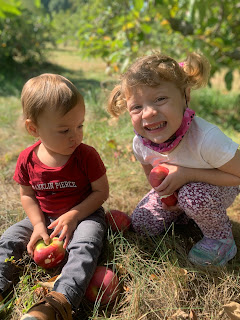 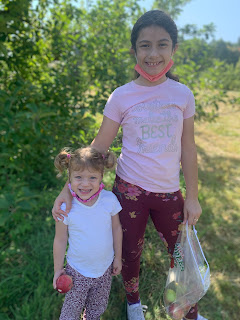 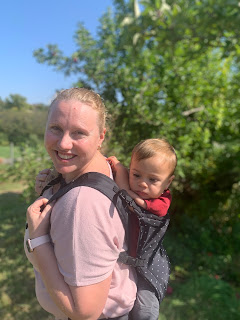 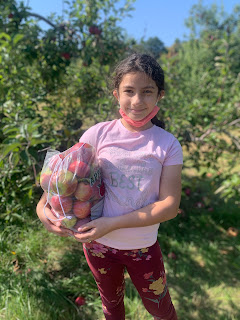 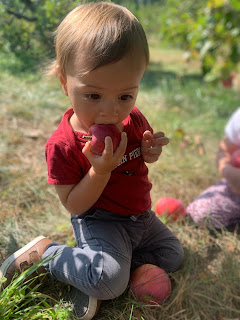 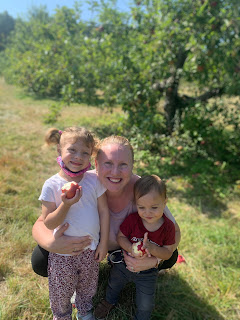 Here was our group at Tougas Farm in 2017 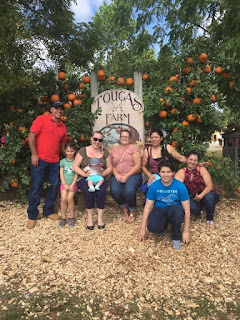 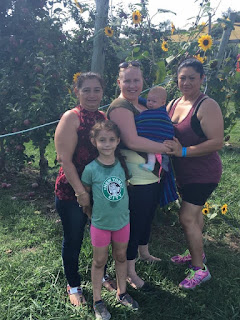 This was one of Francisco and my first dates in 2013 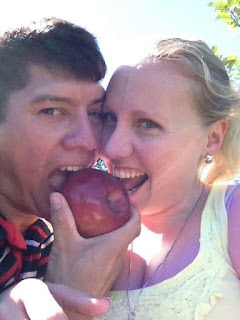 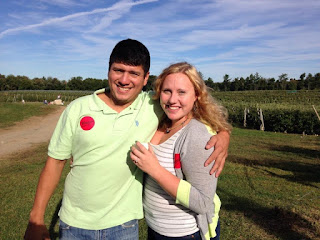