Our family motto is Growing is hard, and that’s okay. I’ve had it plastered to our fridge since we got married and bought a house in the same weekend in October 2014, and I’ve used it in my ESL classroom since 2011, when I first read Carol Dwek and learned about the idea of a growth mindset. I’m an ESL teacher and I used to start every school year with an inspiration speech to my students. I’d tell them to expect my class to be hard, because it would be a waste of time if it were easy. And that’s how I came up with growing is hard and that’s okay.

Right around that time, a friend of mine posted a photo on Instagram of new life emerging in northern Chile months after a 24-hour flash floor buried seemingly everything in mud. It’s one lone flower poking up between dry, cracked earth and when I saw it, I knew it was the perfect depiction of my motto. 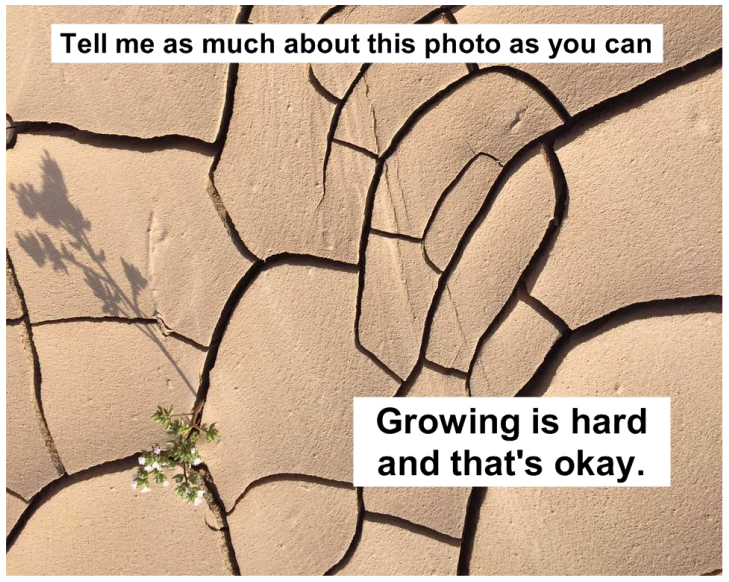 My life motto became our family motto when we started our family in 2014. It is elementary in its simplicity, but that simple phrase resonates so deeply. I sought to instill it within my students, and then within my own children, but it is also something I’ve told myself many, many times over the years, especially when we were buying our first house. I’ve earned my bachelor’s and my master’s degree, I’ve driven across the country, I’ve visited 13 countries, I’ve learned a second language fluently, I’ve given birth to two children, and still buying my first house was the hardest thing I had to do up until that point in my life. The paperwork was endless, the amount of trips I took from the bank to the mortgage broker’s office, the number of official documents I had to find copies of and provide. Not to mention saving the money for the down payment, proving receipts, paying down or paying off other debts I owed, not having any cash transactions and not using our credit card for three months. Buying a house is a logistical nightmare, and that’s after you’ve already been to three dozen open houses, viewed two dozen other houses, and had your offers outbid at least three times on what you thought were three of your dream homes. And then, just when we were ready to close on the house, we saw on the paperwork for the FHA loan that they had marked my husband as a US citizen (which he is not) and we had to start the process ALL. OVER. AGAIN.

So many times throughout that summer I wanted to give up. It was so hard--the endless paperwork, the continual notices and verifications, the emotional rollercoaster of making such a large purchase and commitment, and then when I had to do everything all over again, I wasn’t sure if I could persevere. But I did, and after three full months, we got the keys to our new home on the day before our wedding. Not only had we achieved our goal of being home owners and had we earned the reward for our perseverance, we had also grown so much and learned so much along the way, so that now I can say we actually own three houses, and with each purchase, the experience got easier and easier.

I would use this example for my students to show them that even grown ups are challenged to grow, and that growing is hard even when you are an adult. Then my husband and I adopted his youngest brother and sister from Guatemala in 2015 and we had an instant family. They came to this country and our home not knowing any English, so each day after school I would sit with them at the kitchen table and work through their homework and lessons with them. Whenever they would say, “This is so hard!” I’d gesture to the poster on our fridge, and make them read it to me. Soon they memorized it, and it was the first adage they learned in English, because I told it to them over and over! They went on to learn English fluently in two years, graduate from high school, and now are successful adults of their own.

As we went on to navigate infertility, lost a baby to ectopic pregnancy, and hoped, waited, and prayed for the safe delivery of our two rainbow babies, our motto was like a prayer. Now two and four, our little ones don’t know the struggles that existed before their birth, nor have they known struggle yet in their young lives. But when they do, I will make sure they know that growing is hard and that’s okay.

Three years ago, we took in our seven-year-old niece as an emergency foster placement for a weekend. It turned out to be for far longer than just a weekend, and as we navigated the foster care system with her, growing is hard and that’s okay continued to be our mantra. Foster children and foster families face many challenges, as they work to heal what could be years of trauma the children have had to endure. None of that was easy, but keeping our family motto at the forefront of our minds made facing the challenges doable. Three years later, we are now her permanent legal guardians.

Growing is not supposed to be easy, it’s supposed to be hard and it’s often so hard it hurts. But that is what makes it worth it. We are continually learning and growing throughout our whole life, because that is how we improve. It is only through a growth mindset that we can achieve our big goals or our little goals.