Waka Waka, this time for Latinx

February 04, 2020
With all the hype about the 2020 Super Bowl half-time show, I would be remiss to not share my own reflections, as an American raising three Latinos in this country. I must be honest... none of our family actually watched the half-time show live. Without the Patriots in the game, we didn't have much interested in this year's super bowl, and after a very long day, all three kids, Papi and Mama were in bed and asleep by 8pm. But I woke up the next morning to social media in an uproar.

HipLatina called the white people appalled by the show racist, @thebilingualmami clarified that sexy dancing is just dancing for Latinos, cautioning us against cultural relativism (when you judge another culture based on your cultural standards) and Brianne Schneckenberger responded by writing an eloquent FB post that went viral about how white-centric the American mind is, and outlines the cultural references in the show most white people probably missed.

So this morning I had to look it up on YouTube, and watch the show myself to see what all the outrage was about. Beside the fact that J. Lo could have worn actual pants instead of some black leather cut-outs that looked like S&M attire, I didn’t see anything more appalling than usual. Yes, the show could be considered very sexy, but so is the entire entertainment industry, and what else would people expect when the two headliners are popular Latina divas known more for their coveted abs and gyrating hips than for their musical talent. (Which in itself is a shame, because both of these women have amazing voices!)

Really, I think everyone is just jealous that we can’t all look like that at 50!

In the industry today, it is unfortunate that sex sells. So if their intention was to gain notoriety, they got exactly what they wanted. Shakira and J-Lo's Super Bowl halftime show has received more coverage than the game itself.

And half-time shows have been historically provocative. Doesn’t anyone remember Janet Jackson’s wardrobe malfunction with Justin Timberlake in 2004? Following Super Bowl XXXVIII “Janet Jackson” became the most Googled search term in the history of the internet, and the incident (and public interest in rewatching video of it) actually helped birth YouTube.

So why is everyone arguing about the dance moves and overlooking the more powerful political messages in this weekend’s show? J. Lo and Shakira had an audience of 103 million people, and used their 14 minutes of stage time to make statements about removing children from their cages and reminding people that Puerto Rico is actually a part of the US, and that those born in the USA and reborn in the USA can come together and really make a change. Now that’s something to get loud about. 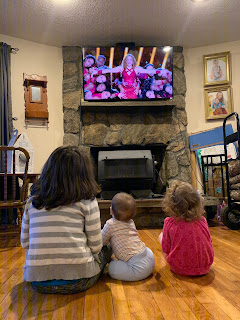 As for being a viewer of this year’s show and a mother to three emerging bilinguals, I would say, let the show go on. If my littles are lucky enough to inherit the dance skills of Shakira and J. Lo through their Latin genes, I will be so proud.

These two superstars are cultural icons, and lets not lose sight of the fact that their appearance on stage together marked the first time in the Super Bowl’s 54-year history that two women headlined the halftime show. In addition, it was the first time the showcase event was topped by two Latinx performers. It should be remembered for the history-making event that it was.

I grew up singing along to songs by Shakira and J. Lo, and I can even credit some of my Spanish fluency to listening to Estoy Aqui on repeat. So let's see them for the strong female role models that they are, and not be blindsided by close-minded cultural appropriations that define women and Latinas by what they wear, or how they move their hips.