April 16, 2020
Maybe it’s because she’s almost three-years-old, or because we’ve been spending so much time cloistered in the house together, but I’ve noticed a huge improvement in Maya’s language output as of recently. She’s been stringing along sentences and recounting stories in Spanish with increasing accuracy, and even her English vocabulary and lexicon has expanded. It also impressed me how she has begun to bridge the two languages, even code-switching when she switches between family members.

Although Sofia usually speaks directly to Maya in Spanish, Sofia’s preferred language is English, so it’s no surprise that Maya mimics almost everything her older cousin says. But she’s also spent a lot of time on FaceTime phone calls with my mom, who speaks only English. So the credit goes to Sofia and Memay for Maya's English language development during this time of quarantine.

Each morning, Maya gets up and comes into my room, where Francisco and I sleep with Teo’s crib next to our bed. 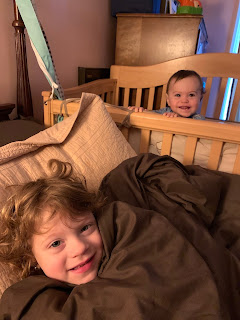 This morning, she came in, jumped on the bed, and yelled, “Get up!”

“Get up?” I repeated groggily and surprised to hear English come out her mouth so early.

“¡Despiértate!” she replied, and completely impressed me with her ability to translate the command. 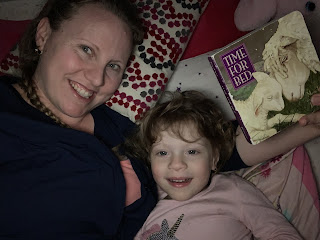 A few nights ago, after she had listened to my mom read her a bedtime story in English, I tried to put Maya for bed. She wanted me to read the story to her again, and started to protest when I reached to turn off the light. “But!...” she began, and then looked me straight in the face and it was almost like I could see the language wheels and gears working within her mind. She had caught both of us off guard, because English is her language with Memay and Spanish is her language with Mami. After a moment, she recovered and self-corrected, saying to me in Spanish. “Pero quiero el libro otra vez.”
I was so pleased with her display of bilingualism, I read her the book again like she asked, but this time, translated each line into Spanish.

It's common for children raised in bilingual households to reach language benchmarks a little while after their monolingual peers, but now as I hear Maya referring to her favorite color as both green and verde, and her favorite food as both cheese and queso, I know she is developing into a strong emerging bilingual, and I look forward to watching her continue to grow.