April 01, 2020
In our new status quo of social distance quarantine life, we’ve been enjoying a little more screen time that normal. Oh well! But we’ve tried to use it to our linguistic advantage, and always have on the subtitles, if possible, and watch as much educational programming as possible. For Maya and Mateo, that means nursery rhymes and children’s songs in Spanish. Our favorite YouTube channel is La Granja de Zenón, which means the farm, and is full of catchy songs, with tunes that don’t annoy the grownups when listened to on repeat.

One such song is “En la granja de mi Tio,” the Spanish version of “Old MacDonald had a Farm.” As we listened and sang along, calling out the animal noises as loudly as we could, it made me think about the cultural transference like this. There’s a lot of mainstream content, songs and books that are translated from English to Spanish, and back when I first became a Barrios and taught Heritage Spanish for Native Speakers at Fuller Middle School (that’s a funny story for another post!) my friend and colleague, Sandra, taught me that there really is something often lost in translation. A metaphor in Spanish is far different than a metaphor in English, which is a brief poetic device that is usually a sentence or two long, whereas metaphors in Spanish can go on for paragraphs. Therefore reading a book that was written in English and translated to Spanish, is probably less quality language than reading a book that was originally written and published in Spanish. Famous exophonic authors have referred to this fact like Samuel Beckett, who said writing in French made him a better writer and Joseph Conrad, who labored to write Heart of Darkness in English, his third language.

Any good reader knows the best translations are not word-for-word translations, which is what makes Google translate so fallible. Instead, a good translation communicates the actual meaning behind the text, while also valuing the audiences social cultural context.

While I was getting my master’s degree in ESL at Northeastern University, I had a professor who worked for the For Dummies book franchise. He told us how they translated the books into languages across the world, often changing the title so as to make it more relatable culturally. For example, instead of calling it For Dummies in Japanese, the title was We Do It Together. This is because to call someone a dummy in Japanese is quite offensive and diminutive, and they wanted a title that would actually sell their books, not insult the readers.

So as I was listening to “En la granja de mi tio,” it made me think about what the translated lyrics say about Latino culture.

The original version of Old MacDonald had a Farm was first published in 1917 the USA in Tommy’s Tune collection, a compilation of songs dating back to the WWI era. It was titled “Ohio (Old Macdougal Had a Farm)” and instead of singing E-I-E-I-O, the chorus was Ohio-i-o. Over time the farmer Macdougal became the more homogenized farmer MacDonald, and the vowel arpeggio morphed into something a little less midwestern.

It made me smile that in Spanish version, the song is about an unidentifiable uncle’s farm. Instead of being about a random old farmer named MacDonald, it’s a bit more personable and possessive, referring to the farmer instead by the endearment “mi tio,” which means “my uncle.”  I feel like this speaks to the familiarity which Latinos have with each other. The farmer is probably not even an uncle, but it’s quite custom for children to refer to any older relative or even friends of the family as “Tio.” In fact, I think we refer to every male in Maya and Mateo’s life as their Tio.

Since Francisco has six full siblings and eleven half-siblings, my kids already have 17 Tios and Tias. Then I can’t even count how many first and second cousins he has, who are also considered “Tio” or “Tia.” That also doesn’t even include all of our friends who are like family to us, and are also known to my children as Tio or Tia. This is as endearing as it is helpful, because with so many Latino friends and extended family, if Maya or I forget someone’s name, we just refer to him as Tio, and its no problem!

It is so common for Maya to call Latinos we know Tio or Tia, that one time we struck up a conversation in Spanish with a friendly Hispanic woman outside Market Basket (she heard Maya and me speaking in Spanish and told me how impressed she was to hear two gringas speaking Spanish so well), and after our brief interlude as we said goodbye and walked away, Maya called to her “Bye, bye, Tia!” 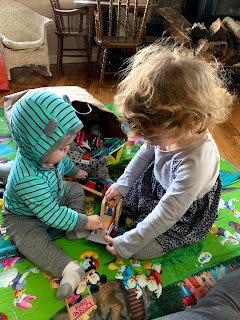 To be bilingual is to not only know two languages, but to also be able to assimilate into two cultures. As Maya is learning more English (and Spanish!) I see her making connections every day and bridging her knowledge from one language to the other. As we are raising all of our kids as emerging bilinguals, it is our goal that these small cultural nuances become second-nature to them, so that they will be able to sing both "Old MacDonald had a Farm," and "En la granja de mi tio" with ease.